WikiLeaks reveals Hillary Clinton’s Staff plotting to use a defeat of Catholic Church, Pope Francis while Archbishop of Buenos Aires

Hillary Clinton’s staff sent her an email revealed by the Wikileaks “Hillary Clinton Email Archive,” to suggest a plot to use a secular defeat the Catholic Church and Pope Francis suffered while he was the Archbishop of Buenos Aires, Argentina.  He was known then as Cardinal Jorge Bergoglio.

The email chain included the line below from a news story that referred to a defeat the Catholic Church in Argentina suffered on Marriage.  The quote inside this line was from Cardinal Bergoglio (Pope Francis):

“… a significant blow to the Catholic Church in Argentina, which had declared the law “a destructive act on God’s plan.” 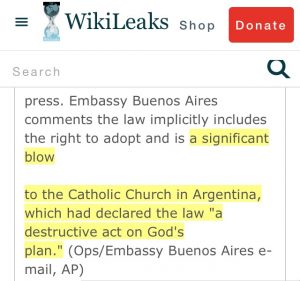 Clinton’s Chief of Staff (Cheryl Mills) then forwarded this story and the following note from other staff to Hillary Clinton:

“This is huge news for Latin America, we should find a way to use this…” 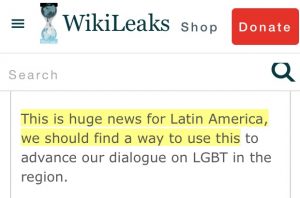 Pope Francis, the head of the Catholic Church in Buenos Aires, Argentina at that time personally called on Argentinians to reject the change to Marriage proposed by President of Argentina (Cristina Fernández de Kirchner.)

By Catholics for America volunteer staff