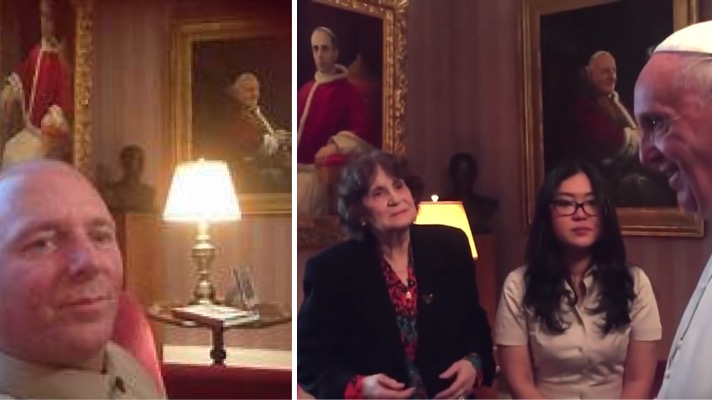 (Pictured L to R; Kim Davis’s husband waiting to meet Pope Francis in a room at the Apostolic Nunciature and then Pope Francis meeting with a former student and his family and friends in the same room the day prior.)

On August 28, 2018, the New York Times reported part of a conversation that Juan Carlos Cruz, the most well known Chilean sexual abuse victim of Father Karadima and Bishop Barros, allegedly had with Pope Francis. Inexplicably, in his conversation with Cruz, the Pope is said to have spoken about his meeting with Kim Davis during his visit to Washington on September 24, 2015, and to have said that he knew nothing about the case before the meeting.

Faced with the Pope’s reported statement, I feel obliged to recount the events as they really unfolded.

At the end of the dinner, at the nunciature in Washington, on the evening of September 23, 2015, I told the Pope that I needed him to grant me a half hour, because I wished to bring to his attention, and possible approval, a delicate and easily achievable initiative; that is, to meet personally and in a completely confidential way, out of the media spotlight, with Kim Davis, a clerk in Rowan County, Kentucky, the first American citizen condemned and imprisoned for one week for having exercised her right to conscientious objection.

At the beginning of our meeting, on the evening of September 23, I gave the Pope a one-page memo summarizing the Davis case (here attached). The Pope immediately appeared in favor of such an initiative, but added that the meeting would have political implications, and said, “I don’t understand these things, so it would be good for you to hear Cardinal Parolin’s opinion.”

It was already 9:30 in the evening, so I went in person with two of the counselors of the nunciature (an Italian and a Lithuanian) to the hotel not far away, where the Pope’s entourage was being hosted. Since I had called ahead to give advance notice of my arrival, His Excellency Archbishop Angelo Becciu (Substitute of the Secretary of State) and His Excellency Archbishop Paul Gallagher (Secretary for Relations with States, and Head of the Political Section of the Secretariat of State) were waiting for me in the hotel lobby. They immediately notified me that Cardinal Parolin had already retired to his room, and they did not consider it appropriate to disturb him, since they could easily make him aware of our meeting the following morning.

We then met in a small lounge of the hotel. As I said, there were five of us. I gave them the same memo that I had given to the Pope, setting forth its content and explaining the reason for my visit, which had been requested by the Pope. After considering the case, Archbishop Becciu was immediately in favor of the Pope receiving Davis privately before he left Washington for New York.

Archbishop Gallagher, while showing support for the idea given the importance of defending the right to conscientious objection, said that it was appropriate to verify from the point of view of common law whether there were any reasons that would render the meeting inadvisable; namely, whether the legal proceedings brought against Davis were concluded or were still open. I therefore had him speak by telephone with the canonist for the nunciature, who before becoming a priest had been a judge in the American military courts and a professor of canon law. After the conversation with the canonist to clarify matters — he said there were no procedural obstacles — Bishop Gallagher gave an unconditionally favorable opinion that the Pope should receive Davis.

The following morning, after the Mass that the Pope concelebrated with us in the nunciature, I informed the Pope of the positive opinion of his two principal collaborators, who had then told Cardinal Parolin about our meeting. The Pope then gave his consent, and I organized to have Davis come to the nunciature without anyone noticing, by having her sit in a separate room. Everything was made much easier by the fact that Davis was already in Washington, where she was invited to receive a Cost of Discipleship Award from the Family Research Council.

Before the meeting took place, I alerted the photographer from L’Osservatore Romano that he should not release the photographs of the meeting without the permission of his superiors. He of course observed the orders, but took many photographs, which have never been published, and are currently kept in the photographic archive of L’Osservatore Romano. I also had Davis promise me in advance that she would not give any news to the media until after the Pope’s return to Rome, at the end of his pastoral visit to the USA. Davis faithfully kept her promise.

Early in the afternoon of September 24, before leaving for New York City, the Pope entered as planned into the sitting room where Davis and her husband were waiting for him. He embraced her affectionately, thanked her for her courage, and invited her to persevere. Davis was very moved and started crying. She was then taken back to her hotel in a car driven by a pontifical gendarme, accompanied by an American Monsignor and staff member of the nunciature.

Once the Pope returned to Rome from Philadelphia after the World Meeting with the Families, the news of his meeting with Davis broke out in the media. An avalanche of phone calls, faxes and emails arrived at the nunciature in Washington and the Vatican Press Office, many with insults and protests, but also many in favor of the Pope’s meeting with Davis. In an article of September 30, 2015, the New York Times reported that “Vatican officials initially would not confirm that the meeting occurred, finally doing so on Wednesday afternoon, while refusing to discuss any details.” The Vatican Press Office then issued a statement — without their superiors in the Secretariat of State ever consulting me — stating that the Pope had never received Davis in a private audience, and that at most he may have greeted her among many other people before departing for New York. Father Rosica and Father Lombardi added to the lies, and were quoted as follows in the October 2, 2015 edition of the New York Times: “But the Rev. Thomas Rosica, a Vatican spokesman, said on Friday that the office of Archbishop Viganò had extended the invitation to Ms. Davis and that the Pope was probably not briefed about her case. And the Rev. Federico Lombardi, the chief Vatican spokesman, depicted the meeting as one meet-and-greet among many.” This is the transparency of the Holy See under Pope Francis!

The next morning, at about 6:00 a.m. in Washington — I remember it well because I had just entered the chapel at the nunciature — I received a frantic telephone call from Cardinal Parolin, who told me “You must come immediately to Rome because the Pope is furious with you!” I left as soon as possible and was received by the Pope at the Domus Sanctae Marthae, around 7 o’clock in the evening on October 9, at the conclusion of one of the afternoon sessions of the Second Synod on the Family.

The Pope received me for almost an hour, and was very affectionate and paternal. He immediately apologized to me for troubling me with coming to Rome, and he lavished continuous praise on me for the way I had organized his visit to the USA, and for the incredible reception he received in America. He never expected such a welcome.

To my great surprise, during this long meeting, the Pope did not mention even once the audience with Davis!

As soon as my audience with the Pope was over, I immediately phoned Cardinal Parolin, and said to him, “The Pope was so good with me. Not a word of reproach, only praise for the success of his visit to the USA.” At which point Cardinal Parolin replied, “It’s not possible, because with me he was furious about you.”

This is a summary of the events.

As mentioned at the beginning, on August 28, 2018, the New York Times reported an interview with Juan Carlos Cruz, in which Cruz reported that during his meeting with the Pope, in April 2018, the Pope told him about the Davis case. According to Cruz, the Pope said: “I did not know who the woman was and he [Msgr. Viganò] snuck her in to say hello to me — and of course they made a whole publicity out of it. And I was horrified and I fired that Nuncio.”

One of them is lying: either Cruz or the Pope? What is certain is that the Pope knew very well who Davis was, and he and his close collaborators had approved the private audience. Journalists can always check, by asking the prelates Becciu, Gallagher and Parolin, as well as the Pope himself.

It is clear, however, that Pope Francis wanted to conceal the private audience with the first American citizen condemned and imprisoned for conscientious objection.