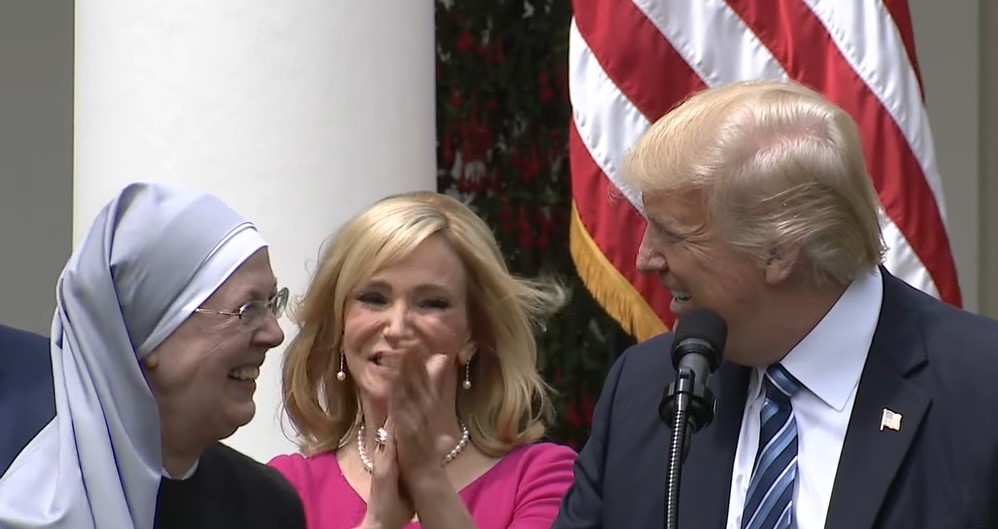 He did it.  It is over. We are grateful.

President Trump delivered Catholics and people of faith what they needed and is their due today;  An end to Obama’s totalitarian HHS contraception and abortion mandate for entities and businesses with sincerely held religious beliefs and moral convictions.  The mandate was made unfortunately possible by ObamaCare, which hopefully will meet its end soon.

Free of the immoral and bankrupting mandate are the Little Sisters of the Poor, EWTN, Belmont Abbey College, Texas Baptist College and others.  According to their legal counsel they still need to get relief in court but, this should be easy now that the government admits the law was broken under the Obama administration.

In May the president promised the Little Sisters of the Poor that “your long ordeal will soon be over.”  It is over.  Thank the Father, Son and Holy Spirit!

Read the full press release from the U.S. Department of Health and Human Services below:

The Departments of Health and Human Services, Treasury, and Labor are announcing two companion interim final rules that provide conscience protections to Americans who have a religious or moral objection to paying for health insurance that covers contraceptive/abortifacient services. Obamacare-compliant health insurance plans are required to cover “preventive services,” a term defined through regulation. Under the existing regulatory requirements created by the previous administration, employers, unless they qualify for an exemption, must offer health insurance that covers all FDA-approved contraception, which includes medications and devices that may act as abortifacients as well sterilization procedures.

Under the first of two companion rules released today, entities that have sincerely held religious beliefs against providing such services would no longer be required to do so. The second rule applies the same protections to organizations and small businesses that have objections on the basis of moral conviction which is not based in any particular religious belief.

In May, President Trump issued an “Executive Order Promoting Free Speech and Religious Liberty” in which the President directed the Secretaries of Health and Human Services, Labor and the Treasury to consider amending existing regulations relative to Obamacare’s preventive-care mandate in order to address conscience-based objections.

The IFR can be found here:

FUND FOR VICTIMS OF HURRICANE MARIA IN PUERTO RICO