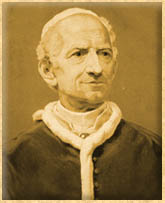 The 124th anniversary of Pope Leo XIII’s great encyclical Rerum Novarum was May 15, 2015.  Class conflict imposed by socialists was of great concern for Pope Leo XIII and the Catholic Church. It still is now, but more commonly referred to today as class warfare.  As the encyclical will show, nothing has changed since 1891 with socialists as they deluded, imposed on and lied to the people then as they do now, except they do it under names like progressives.  Also, the encyclical shows the solution to this socialist/progressive class conflict is to bring the classes together by the intermediary power of the Church to show them the duties they have to each other.  Thus, turning them from socialism and toward unity and justice.  Enjoy the following excerpts:

17. It must be first of all recognized that the condition of things inherent in human affairs must be borne with, for it is impossible to reduce civil society to one dead level. Socialists may in that intent do their utmost, but all striving against nature is in vain. There naturally exist among mankind manifold differences of the most important kind; people differ in capacity, skill, health, strength; and unequal fortune is a necessary result of unequal condition. Such unequality is far from being disadvantageous either to individuals or to the community. Social

and public life can only be maintained by means of various kinds of capacity for business and the playing of many parts; and each man, as a rule, chooses the part which suits his own peculiar domestic condition. As regards bodily labor, even had man never fallen from the state of innocence, he would not have remained wholly idle; but that which would then have been his free choice and his delight became afterwards compulsory, and the painful expiation for his disobedience. “Cursed be the earth in thy work; in thy labor thou shalt eat of it all the days of thy life.”

18. In like manner, the other pains and hardships of life will have no end or cessation on earth; for the consequences of sin are bitter and hard to bear, and they must accompany man so long as life lasts. To suffer and to endure, therefore, is the lot of humanity; let them strive as they may, no strength and no artifice will ever succeed in banishing from human life the ills and troubles which beset it. If any there are who pretend differently – who hold out to a hard-pressed people the boon of freedom from pain and trouble, an undisturbed repose, and constant enjoyment – they delude the people and impose upon them, and their lying promises will only one day bring forth evils worse than the present. Nothing is more useful than to look upon the world as it really is, and at the same time to seek elsewhere, as We have said, for the solace to its troubles.

19. The great mistake made in regard to the matter now under consideration is to take up with the notion that class is naturally hostile to class, and that the wealthy and the working men are intended by nature to live in mutual conflict. So irrational and so false is this view that the direct contrary is the truth. Just as the symmetry of the human frame is the result of the suitable arrangement of the different parts of the body, so in a State is it ordained by nature that these two classes should dwell in harmony and agreement, so as to maintain the balance of the body politic. Each needs the other: capital cannot do without labor, nor labor without capital. Mutual agreement results in the beauty of good order, while perpetual conflict necessarily produces confusion and savage barbarity. Now, in preventing such strife as this, and in uprooting it, the efficacy of Christian institutions is marvellous and manifold. First of all, there is no intermediary more powerful than religion (whereof the Church is the interpreter and guardian) in drawing the rich and the working class together, by reminding each of its duties to the other, and especially of the obligations of justice.