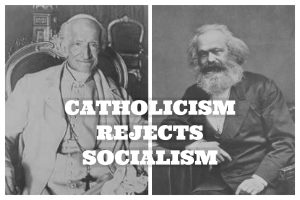 Today, Pope Leo XIII’s encyclical, Rerum Novarum turns 127 years old.  In it, Leo condemns socialism just as the Church condemns communism and socialism today and always in the Catechism of the Catholic Church paragraph 2425 because it breaks the Commandment, “You shall not steal.”

You may have noticed that today’s so-called progressives were vigorously trying to celebrate Karl Marx’s birthday (May 5th) by resurrecting communist/socialist ideas as an answer to a justly regulated free market.  The encyclical sounds like the pope was talking about today’s progressives too.  These progressives want the holders of capital to fail.  But, as Pope Leo XIII states in this encyclical on Capital and Labor, “Each needs the other: capital cannot do without labor, nor labor without capital.”

Here are the striking statements made by Pope Leo XIII about socialism and socialists in Rerum Novarum: