Petition: Ask Pope Francis to tell Obama and Congress to defend Marriage, Life and the Free Exercise of Religion 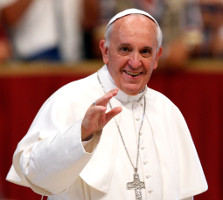 Pope Francis will be in Washington D.C. next Wednesday, September 23rd.  So, sign this petition as quick as you can and ask your friends to sign it and share it too.  Let the Pope hear your voice.

Read the petition letter below.  We have already sent the letter to Pope Francis.

We humbly ask that when you visit President Obama on September 23, 2015 and address the U.S. Congress on September 24, 2015 that you implore each to:

We pray you will address these issues and that this message finds you well and in good health.

Be assured that you are in our prayers.

Supporters of Catholics for America