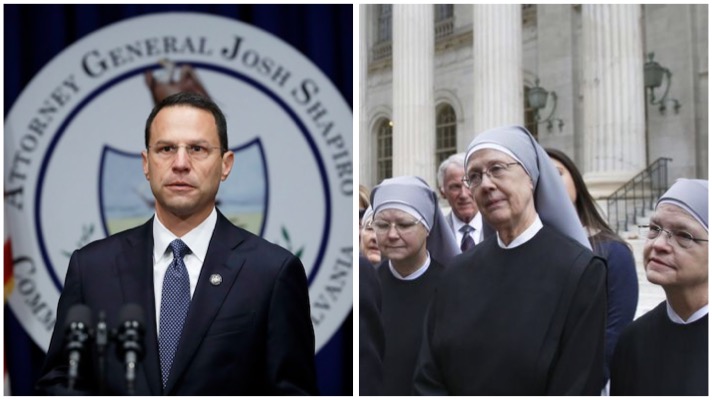 Pennsylvania Attorney General, Josh Shapiro has become well known recently for his grand jury report on sexual abuse by Catholic priests, but he is not well known for his abusive treatment of the Little Sisters of the Poor through his lawsuit.

Shapiro must stick to prosecuting criminals and leave the Little Sisters of the Poor alone.

Below is an excerpt from our latest video showing what Josh Shapiro is doing to the sisters:

“Pennsylvania Attorney General, Josh Shapiro is suing to make the Little Sisters of the Poor pay for abortion drugs in violation of their Catholic faith.

If Shapiro’s abusive lawsuit succeeds it will force the sisters to pay millions of dollars in unjust fines.

It will force the sisters into bankruptcy.

It will leave the elderly poor whom the sisters guard in their care to be victims of Josh Shapiro’s abuse.

Now that you’ve watched the video you need to know that Shapiro is not alone in his abuse of the sisters.

Likely, every democratic party politician running for Congress in the U.S. House and U.S. Senate wants this cruel and immoral lawsuit to succeed, forcing the Little Sisters of the Poor into bankruptcy.

They want this lawsuit because it would bring back the previous application of the HHS Mandate that was created because of ObamaCare, to force the sisters and others to pay for abortion causing drugs against their will.

Below are just some of the senators or candidates who want to bully the sisters into bankruptcy.  We have produced eighteen of many short video ads for admonishment of politicians that we hope to advertise:

We need your help to let everyone know the danger the sisters are in.

We need your help to let everyone know which politicians want the sisters to go bankrupt.

We need your help to show Catholics these Ads. You can help by giving here.

For more information about the Little Sisters’ legal battle go here and here.