Archbishop of OKC: It’s about more than restrooms 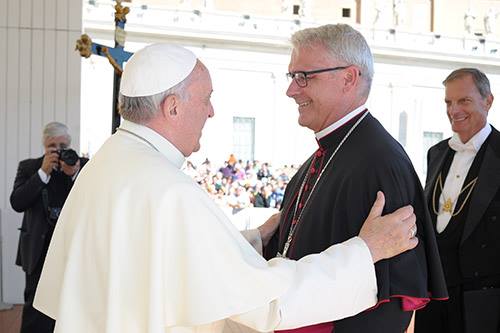 Earlier this year I came across an “all gender” restroom in the airport of a large American city. I had never seen such a thing. I snapped a picture. It struck me as strange, certainly not something I would expect to find in Oklahoma, for example. That may be about to change.

The media have been highlighting recent legal attempts in some states to keep boys out of girl’s restrooms and vice versa. This latest restroom controversy is a manifestation of the new battleground over “gender.” This battle, however, is about more than who can use which restroom. According to rules just issued by the Obama administration, public schools ought no longer to differentiate between boys and girls based on their biological sex, but now ought to acknowledge and accept their personal “gender identity.”

This is to be the basis for allowing them to choose which restroom to use. So-called gender identity, according to the gender theorists, is a matter of personal expression rather than biology. Consequently, if a boy self-identifies as a girl, then he ought to be allowed to use the girl’s restroom or locker room in any school that accepts government funding. It doesn’t take long to imagine the bizarre consequences that this way of thinking and establishing public policy and law will have in the future.

Efforts to resist the imposition of this gender ideology are already meeting stiff resistance from the federal government and powerful economic forces that are determined to advance their radical reinterpretation of human personhood and relationships. In recent years, many Americans were astounded by how rapidly public opinion, cultural standards and laws changed with regard to the acceptance of so-called homosexual marriage.

Today, anyone who questions the appropriateness of equating same-sex unions with traditional marriage is labeled a bigot, a homophobe and a “hater.” Stiff economic penalties and laws are being enacted that threaten individuals, businesses and other associations that dissent from this new radical orthodoxy that is being advanced by a powerful network of special interests.

What proponents called “marriage equality” was just the beginning. Gender ideology is the next tsunami that threatens to sweep away centuries of accepted human wisdom about the complementarity and real differences between men and women.

Pope Francis’ recent apostolic exhortation, “The Joy of Love,” acknowledges the threat that this new radical gender ideology poses. It was the subject of much discussion in the recent Synod of bishops on the family. Pope Francis writes, “Yet another challenge is posed by the various forms of an ideology of gender that ‘denies the difference and reciprocity in nature of a man and a woman and envisages a society without sexual differences, thereby eliminating the anthropological basis of the family. This ideology leads to educational programs and legislative enactments that promote a personal identity and emotional intimacy radically separated from the biological difference between male and female.Consequently, human identity becomes the choice of the individual, one that can also change over time.’”

As with every ideology this one asserts itself as beyond dispute and absolute. It envisions a brave new world in which the creature asserts himself as the creator of his own reality. This is demonic. Pope Francis continues, “It is one thing to be understanding of human weakness and the complexities of life, and another to accept ideologies that attempt to sunder what are inseparable aspects of reality. Let us not fall into the sin of trying to replace the Creator. We are creatures, and not omnipotent. Creation is prior to us and must be received as a gift. At the same time, we are called to protect our humanity, and this means, in the first place accepting it and respecting it as it was created”(Amoris Laetitia 56).

I am not an alarmist, but it seems clear to me that battle lines are being drawn very clear. And, these lines are about more than government overreach. This is a spiritual battle between Light and darkness.

Saint Michael the Archangel, defend us in battle!

This column was first published May 29, 2016 for the Sooner Catholic, a publication of the Archdiocese of Oklahoma City.