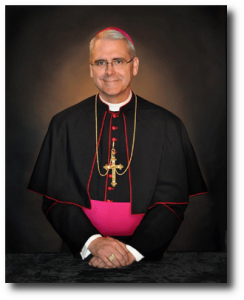 Recently I came across a schedule of events for the Civic Center Music Hall in Oklahoma City.   Imagine my astonishment upon reading about a ticketed “Black Mass” performance that will be presented at this public institution!

I am willing to give the benefit of the doubt and assume that this event was scheduled without knowledge of what was going to be taking place.  The so-called Black Mass is an occult ritual normally carried out in secret among those initiated into its dark mysteries.  It is astonishing that this is being performed in such a public way and in public space.  In a Black Mass a consecrated Sacred Host, obtained by stealth from a Catholic Mass, is corrupted in a vile and sexual manner and then becomes the sacrifice of this pseudo Mass offered in homage to Satan.

For over one billion Catholics worldwide and more than 200,000 Catholics in Oklahoma the Mass is the most sacred of religious rituals.  It is the center of Catholic worship and celebrates Jesus Christ’s redemption of the world by his saving death and resurrection.  In particular, the Eucharist – which we believe to be the body, blood, soul and divinity of Jesus Christ – is the source and summit of our faith.  A Black Mass is a satanic inversion and mockery of the most sacred beliefs not only of Catholics but of all Christians.

I am astonished and grieved that the Civic Center would promote as entertainment and sell tickets for an event that is essentially a blasphemous and sacrilegious mockery of the Catholic Mass.

It is hard to imagine the Civic Center turning a blind eye and allowing a group to use its facilities to burn a copy of the Koran, or to conduct an overtly anti-Semitic performance.  Nor should they!  Why is this any different?  There are community standards to uphold.  And these prohibit works that are “illegal, indecent, obscene, immoral or in any manner publicly offensive.”  A Black Mass certainly qualifies as offensive, obscene and immoral.  Its sole purpose is to show hostility toward Catholicism and all that is sacred to Christians.

Acts of public sacrilege undermine the foundations of civil society and have no redeeming social value.  They undermine respect for social, cultural and religious institutions.  They mock and tear down and provide no comparable social goods.

I certainly hope that those allowing this event will reconsider whether this is an appropriate use of public space.  We trust that community leaders do not actually wish to enable or encourage such a flagrantly inflammatory event and that they can surely find a way to remedy this situation.

If the event does move forward, we will consider other peaceful, prayerful and respectful options to demonstrate our opposition to this publicly supported sacrilegious act.

In the meantime, I call on all Catholics in Oklahoma and elsewhere, as well as all men and women of good will, to pray for a renewed sense of the sacred and that the Lord might change the hearts and minds of the organizers of this event.  May God protect us from the power of evil which such an event invokes.

(Sentences were bolded for emphasis by Catholics for America.)