Alas, the Little Sisters Are Not Going to Jail 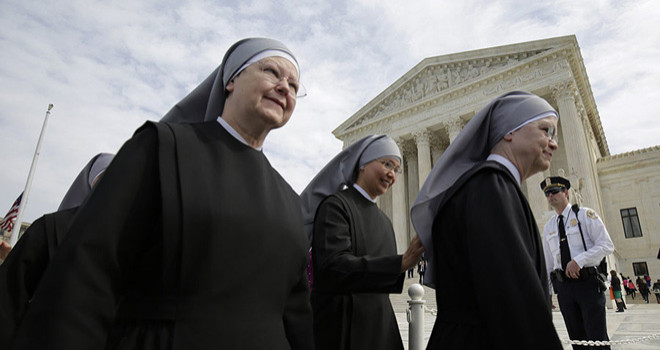 A few weeks ago I gave a talk in Omaha called “No Finer Time to be a Faithful Catholic.”

In the talk I argue that it is the finest time to be a faithful Catholic not in spite of all manifold and manifest troubles we face today, but precisely because of them. I argue it is an honor to be one of the few called by God through all of eternity to act on our faith right now in these troubled times.

Among the troubles I cite in the talk are the assaults on religious freedom, and I express my hope that the Little Sisters of the Poor go to jail for refusing to cooperate with the so-called contraceptive mandate. This usually gets a big laugh, especially when I point out that jail might be their vocation but it certainly is not mine.

After my talk in Omaha an elderly gentleman approached and told me his story. In January, 1989, he was diagnosed with a nasty form of cancer and given no more than a year to live, most likely six months. His priest said he and his wife should pray to Blessed Jeanne Jugan for a cure. Within two months he was totally cured. Dr. Edward Gatz became the final miracle that allowed for Jeanne Jugan to be canonized by Benedict XVI. In case you do not know, St. Jeanne Jugan was the founder of the Little Sisters of the Poor.

Gatz found it a jolly idea that the Little Sisters of the Poor should land in the hoosegow for their religious beliefs. He said, “They would transform the prison system.”

I even said that to one of the Little Sisters recently and she, too, had a belly laugh about it. Why is such a horrible thought met with such uniform jollity? Because it would be the brightest of bright lines that something awful is happening in this country. Cuffing nuns and hauling them off to stir is something we should all fervently pray for starting today.

Too many people are simply not paying attention. We are comfortable in our nice homes with our wicked-fast internet and cable television, the endless Best Buys and Dick’s Sporting Goods and Bed, Bath and Beyonds as far as the homogenized eye can see. Most people simply do not know that the water has heated up to a rapid simmer, almost a boil.

Something has to awaken our friends and family from their lethargy. Will it be men showering with girls? Will it be nuns sent to jail?

Say NO to men in women’s bathrooms!  Say NO to politicians who are pushing for this dangerous idea in your community.  Click HERE to become a Catholics for America member today.

Why do I say that it is odd? As law professor and religious liberty expert Michael McConnell points out, “Parties are under no obligation to settle, and when they do not and the courts have jurisdiction, the courts decide the legal matters. I have never heard of an appellate court saying, in effect, ‘No, we’d prefer not to decide the case. Go back to the lower courts and work it out.’”

According to McConnell, both the nuns and the government (reluctantly) agreed that, if the nuns were excused from having to provide coverage, or pay for coverage, or submit paperwork triggering coverage, their consciences would not be implicated. The government would be left to force the insurance company to separately insure employees for contraception, with no connection to the Sisters’ health plan. McConnell says this suggestion is “solomonic” if, that is, the government finally chooses it.

What a lot of nonsense this has been. President Obama has picked a fight with a congregation of nuns who care for the indigent elderly. Obama has decided that their work is not Catholic, according to the accommodation he so graciously offered only to churches. Someone said that Jesus Christ himself would not qualify for the religious exemption offered by Emperor Barack because Obama says you’re not Catholic if you minister to those of other faiths.

One of the Little Sisters spoke to our church recently to talk about their work with the indigent elderly in Washington DC. She told the story of a little old man newly ensconced in their facility. He was wandering the halls one day and he poked his head into an office and asked this to one of the Sisters, “Is this Heaven?”

“Because everyone here is so kind to me, everything is so clean, and the food is good.”

Imagine the government run hell-hole where this poor old man was consigned to die until he was found and brought to the Little Sisters.

It is bad news for us that the Little Sisters are not going to jail but it is good news for that little old man and all the rest who are comforted in their final days, not by government but by the loving hand of those the president says are not Catholic.